What is Dogecoin? Everything You Need to Know 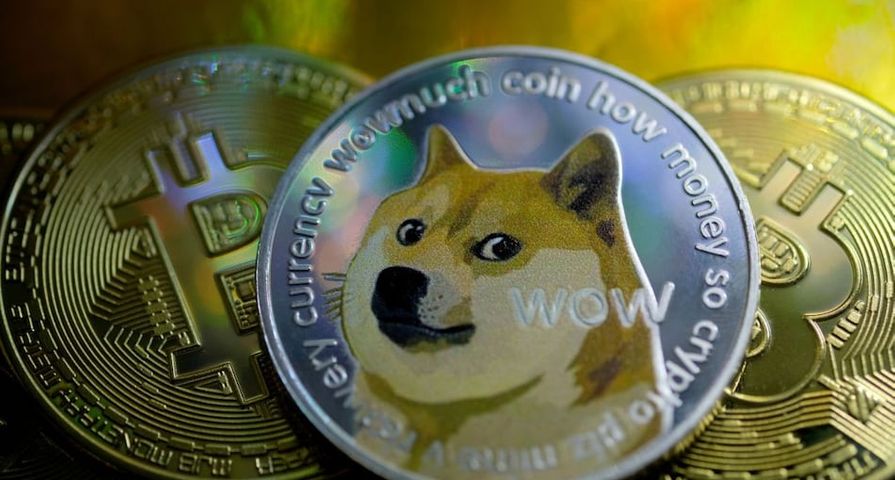 Tools To Protect Your Investments During A Market Rout

It’s been a strange few months when it comes to internet investing. Sure, there’s the whole Gamestop fiasco (which is actually still ongoing). However, tucked under that $GME marquee was a secondary “meme stock” that’s also taking the internet by storm. Actually, it’s technically not a stock at all. Dogecoin is a cryptocurrency, just like Bitcoin (but not exactly like Bitcoin, as we’ll discuss shortly). It was created solely as a joke, and was treated as such for most of its existence. You could buy a single Dogecoin for less than a penny — at least, before the great Doge-craze of 2021 started. Dogecoin has recently gained steam and suddenly shot up in value — up to 40 cents apiece at times. So how can a joke crypto coin suddenly turn into a legitimate investment opportunity? Is Dogecoin even a legitimate investment in the first place? What is Dogecoin, anyway?

Simply put, Dogecoin is one of the many cryptocurrencies currently available to buy and sell. It was created and debuted in 2013 by Billy Markus and Jackson Palmer, two software engineers from IBM and Adobe, respectively. It was named after the popular Doge meme (much coin! So value! Very money!). The whole thing started as a joke, almost to mock the larger popularities of Bitcoin and Ethereum .

For many people, Dogecoin became known when supporters raised 67.8 million Dogecoins (about $55,000 USD at the time) to sponsor a NASCAR ride in 2014. Race driver Josh Wise drove a Dogecoin-wrapped car in the Aaron’s 499 at the Talladega Superspeedway. The comical appearance of the car made news across many major outlets. Wise finished 12th. The “DogeCar” even made a DLC appearance in the NASCAR 14 video game.

Why is Dogecoin Suddenly So Popular?

After close to seven years of almost no actual growth, Dogecoin skyrocketed in value in 2021. So what gives? You can partially blame the gang over at the Wallstreetbets subreddit. While they were busy pumping up GME, AMC, and NOK, a smaller trend to buy Dogecoin emerged at the same time. This trend was bolstered by public support from the likes of Tesla CEO Elon Musk and Mark Cuban, who both tweeted about Dogecoin. Their attention caused the price — and popularity — of the coin to spike. In addition, threads about Dogecoin are routinely reaching the Top Page of Reddit. The Dogecoin subreddit has also grown exponentially. It went from 179,000 subscribers at the start of 2021, to almost 1.5 million by mid-April.

Dogecoin investors are hoping to keep momentum going. The current goal is to push the price of Dogecoin over $1. That would be an incredible return for those who bought it when it only cost a few cents. Redditors unofficially labelled April 20 as #DogeDay. It has no real significance to the coin itself, but it’s hardly a coincidence that 4/20 is also a celebrated holiday for marijuana enthusiasts.

The #DogeDay support did push the price of the coin up towards it highest ever mark, but only briefly. It settled back down in the mid-20-cent range within 48 hours.

Yes and no. At its core, Dogecoin is a cryptocurrency like Bitcoin. You can buy it on certain cryptocurrency exchanges. And technically, it’s a form of currency. Although extremely limited, you can use Dogecoin to pay for a small number of things around the internet. For example, the popular tech supply website Newegg recently announced they would start accepting Dogecoin. You can also buy Dallas Mavericks merch, thanks to team owner Mark Cuban’s public support. However, it’s still pretty rare to pay online with Dogecoin.

However, there is one major difference between Dogecoin and Bitcoin. Only 21 million Bitcoins can ever be mined. Once that happens, no future Bitcoins can ever be created. Dogecoin, however, has no such limit. New Dogecoins are mined in the same way as Bitcoins — computers solving complex math problems. However, it’s much easier to mine Dogecoin. Most importantly, there is no limit on the number of Dogecoins that can be created. There are already 129 billion in circulation. Critics of Dogecoin point to this fact when arguing that supply will always outnumber demand, keeping Dogecoin mostly worthless.

So far, not really. Many popular cryptocurrency websites don’t even trade it yet. Aside from Newegg and Mavs gear, there aren’t many places you can actually use Dogecoin to buy something. AirBaltic — an airline in Latvia — accepts Dogecoin. So does Kessler Collection, a luxury resort company. You can also use Dogecoin to pay for *ahem* certain adult content around the web.

So unless you are a Mavs fans who routinely travels to Latvia, your options are pretty limited. Most people aren’t buying Dogecoin in order to spend it, though. They are hoarding as much as they can an as investment, hoping to eventually sell it for a huge return. After all, $1,000 of Dogecoin bought in January was worth $40,000 at one point this week. Even after the 4/20 DogeDay dip, that $1,000 is still worth ~$22,000 today. It would be worth $100,000 if Dogecoin ever hits the much-talked about milestone of $1.

Is Dogecoin a Joke?

Absolutely, it is. But so was Gamestop stock for a while, and lots of investors made thousands (or millions) by buying it early. Even though Dogecoin is kind of hilarious, with its strange name and derpy dog mascot, it’s still a very real thing. It’s bought and sold with legit U.S. cash. That means is still has real value to many people.

There are certainly a ton of speculative investors who dropped major dollars on Dogecoin before its rise. Even if those investors got cold feet on the volatile swings, they could sell off today and made 23X their investment. Some simple math shows that buying $100 as a joke in January would net a tidy sum of $2,300 today. If you dropped $1,000, it’s now worth $23,000. And those who had the means to buy $10,000 or even $100,000 of Dogecoin? The massive return of investment they’re seeing is hardly a joke — as long as they sell before Dogecoin drops back down to nothing (if it ever does, that is).

Should You Invest in Dogecoin?

Let’s get the disclaimer out of the way first. We are not investment professionals, certified market analyzers, or anything else. We do not provide investment advice. You should always do your own research or talk to a professional before you invest your own money. It’s just as easy (sometimes easier) to lose money than it is to win big.

That being said, Dogecoin is a highly speculative investment. The same is true of pretty much every other cryptocurrency too. The prices rise and fall dramatically. It can be a lot to handle, especially if you have serious money tied up. Is it possible that Dogecoin hits $1, or more? Sure it is. Is it also possible that it drops back down pennies per coin? Definitely. Especially with its infinite quantities.

Investing in Dogecoin can be fun. Join the subreddit and tweet at Elon, if you want. But don’t risk money you can’t afford to lose. If you’re not regularly investing into a 401(k) or IRA account, and don’t have a well-stocked emergency fund, consider putting your Dogecoin money into something else.

What is Dogecoin’s Overall Value?

We states earlier that there are roughly 129 billion Dogecoins currently in circulation. That number grows every day. The price of Dogecoin also fluctuates quite a bit. That means it’s hard to pinpoint its exact value. It just changes too often. However, if you multiple those 129 billion Dogecoins by the today’s price (~$0.23), the overall value of all Dogecoin is about $30 billion. For perspective, General Mills and Allstate Insurance both have a market cap of about $37 billion. Delta Airlines is roughly $30 billion. Kia is just shy of that $30 billion mark. So, as of today anyway, Dogecoin is worth as much as a major Korean automaker. Wow!

Where Can I Buy Dogecoin?

Reddit can explain it way better than we can. If you’re serious about buying Dogecoin, check out that link for a wealth of information.

However, the short version is that you need you need to start by having a cryptocurrency wallet. There are multiple options, including an official Dogecoin wallet. After that, find a platform that buys and sells Dogecoin. Sometimes you cannot buy Dogecoin with regular U.S. currency. You may have to first buy some Bitcoin, Litecoin, or Ethereum. Then you can exchange those coins for Dogecoin. One of the biggest crypto buying websites is Coinbase. However, they don’t currently offer Dogecoin. A crypto exchange site like Changelly will let you swap your Bitcoin for Dogecoin, though.

Alternatively, you can actually buy Dogecoin on the popular trading app Robinhood. However, internet traders have been distrustful of Robinhood ever since they put a halt on Gamestop trading during its most volatile days. One downside it that Robinhood is a closed ecosystem. You cannot use it to transfer your Dogecoin to your crypto wallet. It just remains in your Robinhood account until you sell it. There are multiple other platforms you can use too.

As with any cryptocoin (or even traditional investments, for that matter), it’s impossible to predict where its value will be in the future. It’s possible that Dogecoin’s status as a “meme stock” will continue to push its price up. It’s also possible that the Reddit masses will lose interest, and the price of Dogecoin will fall back to where it was, only worth pennies (or less). With its unlimited supply, there are strong enough reasons to believe that Doge will never really be worth the thousands of dollars that Bitcoin or Ethereum is.

All that said, investing in Dogecoin can be fun (and maybe profitable). It’s incredibly cheap, meaning you can own some coins even if you only have a few spare bucks to invest. Then you can join the subreddit and tweet at Elon Musk about your holdings! Just remember that any money invested can also disappear if the price of the coin suddenly plummets. Don’t over extend yourself.