How to Handle Awkward Money Moments 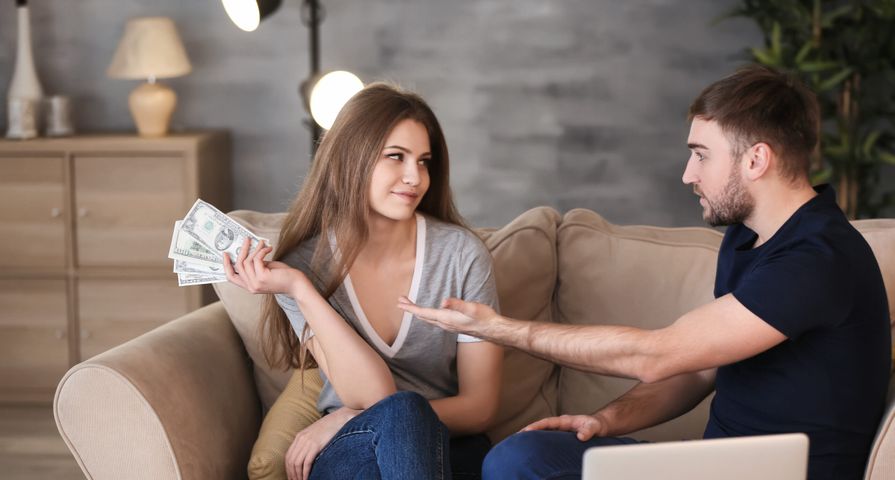 9 Common Money Mistakes That Will Hurt Your Retirement

We’ve all been in the unenviable situation where money can threaten to hurt a relationship. The funny thing is, it’s sometimes not even a huge amount of money that can make things awkward. Most of the time, the awkward moments involve day-to-day amounts. Yet they can still lead to anxiety and anger. Do you remember any tough financial conversations that have led to hurtful feelings? Here are four common awkward money moments, and how to handle them gracefully.

This unfortunate moment happens all the time among friends. Maybe you’re watching your pennies, so you order a salad and an iced tea. Meanwhile your friends get several cocktails, an expensive meal, and dessert. When the bill comes, they casually suggest “let’s split it evenly.” Ummm, no thanks!

If you know your pals tend to go overboard on meals out, then the best defense in these situations is a good offense. Tell the waiter as soon as you sit down that you’ll need a separate check. This does two things. First, you are letting the waiter know that you are only going to pay for what you ordered. You’re definitely not planning to subsidize everyone else’s orders. Second, you avoid having to ask others to pay more once the money is pooled and somehow the total comes up short. And it always seems to come up short.

One of my friends take this idea even further. She will excuse herself after the meal to go to find the waiter to pay her bill first. Once that is done, she doesn’t even need to take out her wallet when everyone is scrambling to figure out who owes what. She just casually mentions, “oh I already paid my tab” and ignores the pending awkwardness. I don’t have the discipline to follow through on her plan. However, I admire her will to keep things clean.

If it’s the first time it’s happened to you, then speak up when your friends start doing the math about splitting things evenly. There’s no need to be embarrassed that you only want to pay for what you ordered. If you can do the calculations on your own, and take out the amount equal to what your portion of the meal is before everyone decides to split the bill evenly, then that’s even better.

Consider taxes and your portion of the tip too, to be fair. For example, if your entrée was $17, your drink was $4, and you shared half of a $12 appetizer, throwing down $25 doesn’t cover it. Even $30 is a bit short. Try to err on the side of generosity.

It will sound more graceful than stating that you just want to pay for your own portion outright. Especially if everyone at the table agrees to pay for the bill evenly. If your friends balk, then I suggest you go ahead and take the financial hit this one time. (Unless the difference is an amount that will create real financial stress in your life.) Just know that you should probably avoid eating out with these particular friends in the future.

Restaurants have a way of making awkward financial moments come to the forefront. It can be really difficult to know what to do if your father-in-law or friend offered to pay for lunch (yay!), but then leaves a paltry tip for the waitress who took care of you (oh no!). This is particularly awkward for anyone who has ever waited tables themselves.

If your offer to pay for the tip is waved off, you can always return later by yourself. Or even mail additional tip money. I have a story (not necessarily about tips) but it does relate to going back a restaurant to pay. One time, I just left the restaurant without even paying for the food. I asked for the bill and it must’ve taken a while because we just forgot we haven’t paid. We actually left the restaurant after chitchatting for a bit too long. It was a total mental lapse!

It wasn’t until the next day when I happened to look at my credit card statement. I noticed there was no charge and realized we never paid. How embarrassing! But I went back, talked to the waiter, and they were able to bill me. Tips would be the same thing. Don’t avoid going back just because you feel embarrassed. Offering cash is great, but they probably can bill the tip to your credit card too.

One of the most difficult situations you can find yourself in is when a friend or family member comes asking for a loan. How to deal with this situation entirely depends upon the details. Do you have the money available to lend? Do you trust that you will receive the money back?

If the answer to the first question is no, then simply tell your would-be borrower that you can’t do it. If, on the other hand, you can afford to lend the money but you don’t trust that you’ll ever see it again, you have a tough choice to make. It’s up to you to decide whether you’re okay if the “loan” turns into an outright gift.

If you’re willing to take the chance, draw up an quick loan agreement. Make sure to detail when and how you will be repaid, and then both of you sign it. The details should include how much, when, and whether it’ll be repaid in full or in batches. It should also include what happens in the event that the money cannot be paid back. The two of you should keep a copy, and treat the agreement like any legal contract.

It’s fairly easy to say no to charitable requests in general. You are not required to buy wrapping paper to support your co-worker’s daughter’s marching band. Nor do you have to give money to a charity that your best friend happens to support. Although it will be weird if you then also request money for charity from the same group of people, without ever giving to their causes.

This happens a great deal to parents. You may only be trying to help your children’s fund-raising efforts by bringing the Girl Scout cookie order form to your office. But you can probably expect to only get what you give, so to speak. While you’re certainly not required to donate money or buy from every person who helped your causes, it does get a little awkward if you solicit money without ever giving back.

If you can’t afford to donate at work or within your social circle, then it’s not a great idea to solicit from that group in return. If you can afford it, remember that there is an unspoken social contract in place. Make sure you try to help them out when it’s their turn to solicit.